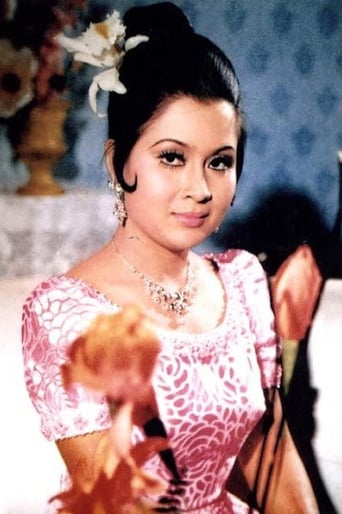 Petchara Chaowarat (Thai: เพชรา เชาวราษฎร์, born January 19, 1943, in Rayong Province, Thailand) is a Thai film actress who starred in around 300 films from 1961 to 1979. An icon of the "Golden Age" of Thai cinema, she was known for her round, pool-like eyes and elaborate hairstyles. Her first film and starring role was in Banthuk Rak Pimchawee (Love Diary of Pimchawee), in 1961. She co-starred with popular leading man, Mitr Chaibancha, and they proved to be popular pair, starring together in more than 150 films. One of their most popular films was 1970's Monrak luk thung (Thai: มนต์รักลูกทุ่ง, or Magical Love of the Countryside), a musical rhapsodizing Thai rural life. In 1964, Petchara was named best actress by the Thailand National Film Awards committee for her role in Nok Noi, and received the award from the hands of King Bhumibol. After Mitr's accidental death on the set of Insee tong in 1970, Petchara continued to act in films. She starred in the 1971 musical comedy Ai Tui (Mr. Tui), in which she co-starred with Sombat Metanee, who became a popular leading man after Mitr's death. Her last film was Ai Khuntong, which was released in 1979.